You can compete with the world's best

Most competitive shooters stagnate at the level of those willing to help them. Let's face it, local club matches are stocked with your best friends, and they are trying to beat you! Get the competitive edge, - the outside training that will have your peers wondering where that knowledge, speed and aptitude came from. Our DVD series is your "Secret Weapon".

Don't think for a moment that "muscle memory, practice, and good genes" will allow you to compete with the world's finest gunman.

Why “Secret Weapon”? Our sport is an individual sport. But we find ourselves competing against our friends. Let’s face it friend or not, the tips and pointers we pick up along the way are NOT always shared knowledge. Our DVD’s ARE that Secret Weapon that will have your buddies wondering if you have an expert in your hip pocket.

The driving force behind Secret Weapon TrainingTM is one Nick Saiti. This Brooklyn New York Native will proudly spout the fact that he was born on “the anniversary of our country…” (the Winter of 1976…)  Having moved to Arizona with his family Nick wouldn’t even own a gun until he was well into his twenties. He found himself in the dessert “plinking at cans and paper” for fun. The Fun turned to a passion for competition when in 2003 our hero found a local IDPA match on the internet. He showed up unannounced that day with his Para Ordnance .45, three magazines and a willingness to learn.  He stepped foot on that range for the first time without the guidance of friends or any influences, good or bad. He left there that night with a fifth place overall finish among some pretty stiff competition, beating out more than a few locals who were at this for decades. There was a new gunslinger in town.

Over the next 13 years not a week would go by without Nick shooting, shooting IDPA, USPSA, IPSC and Steel Challenge, Shooting predominantly Open division and 3 Gun.  Shooting at local matches for practice, and at State, Nationals and World for the love of the sport. A few trophies, sponsorships, and prizes have come along for the ride. But Nick himself will tell you to go “look on the internet or my Mom’s guestroom…” if you want to tally his success with wood and metal plaques. I looked. I hope Mom has a big guest room!

“Shooting is my happy place.” Nick says with a boyish grin.  “I’m always happy when I’m on the range.” I can tell you from firsthand experience that Nick is a born teacher. My Daughter and I were shooting a local USPSA club match where I was competing for less than a year. The place “lit up”, as fans of Nick Saiti spoke in hushed tones to the man next to them. “Watch this guy shoot this stage.” After seeing what he could do with the same gear I was running I felt like I was going in slow motion.  I was surprised when Nick took a genuine interest in us and immediately offered unsolicited advice on my shitty draw. (my word, not his.) Before we left that night he would ask me “What do YOU want to get out of this?”

“I spend a lot of time watching.” Nick will tell you. “I watch, and I pick apart people as they shoot. I look at how they attack the stage and see the tiniest way to shave a second, or even an instant…” “Watching guys like Rob, Angus and Matt made me the shooter that I am, for what that’s worth.” He laughs. “Buddies at matches introduced me to guys like Muneki and Tim. It always starts with… Hey, this guy shoots a LOT. You could learn somethin’ hangin’ around him.”  -   This makes Nick uniquely qualified to teach. And another fact; he has never taken a formal shooting class.

Nick will tell you that “Anyone can compete at the level of a world champion with training.” He might be right. His talent lies not only in shooting like a mad man, but also the ability to help others achieve THEIR best shooting selves.

Without the student there would be no master. (or Grand Master as it applies to our sport.)

Nick is heard to ask almost every shooter that he encounters “What do YOU want to get out of this?” The answer to that question is as diverse as the people answering it. I told him I wanted to “Have fun.” But have since realized with his help I am a contender for some serious wins.

So, what’s YOUR answer?

Copyright ©SecretWeaponTrainingLLC. All Rights Reserved. All contents of this site (including artwork, text, photos, other representations of the artworks, materials related to the artworks) are protected by copyright – any use of these materials without the express permission of Site name is a violation of said copyrights.

You can add HTML directly into this element to render on the page.

Just edit this element to add your own HTML.

You can add HTML directly into this element to render on the page. 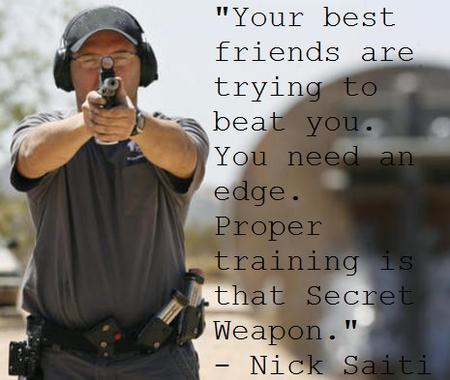 How Can a Video make me shoot faster?

The absolute best competition shooters use video to hone their skills on a regular basis.

train to compete, compete to win!

Our training program puts you in the moment. You KNOW that this game is a mental mindfield. Knowing where to "step" will see you shaving time and standing at the podium!

Harnessing creativity and perfecting the craft with practical experience.

Bumping around in the dark like so many newbies gets you nowhere fast. We understand that competition shooters take YEARS to sharpen their skills, Mostly because there is NO ONE really on YOUR side.

Traveling the world for over 22 years and competing in HUNDREDS of matches you pick up a short cut or two. SWT is ready to shaw you what's behind the curtain.